The Wyoming County Chamber & Tourism is very pleased to announce that Letchworth State Park was named the USA Today Readers Choice Best State Park for 2015. The announcement was made today by USA Today on the website www.10best.com following the month long contest.

“Thank you to all the fans of Letchworth State Park who voted in the contest. From Facebook groups to individuals, Letchworth State Park has a loyal following and they let their voices be heard,” said Meghan Nulty, V.P. of Tourism and Marketing. “The exposure for the Park has been tremendous and will introduce this great natural asset to countless visitors and encourage them to visit our area.”

“Congratulations! Letchworth State Park, known as the ‘Grand Canyon of the East,’ is a majestic natural wonder. Its breathtaking views of the Genesee River cascading over three waterfalls and over 600 foot gorge walls makes it a sight to be seen,” said Stephen Tarbell, Town of Castile Supervisor. “It’s one of the most beautiful state parks in the country.”

On hearing about the announcement, James Brick, Town of Perry Supervisor said, “Letchworth Park has always been and will continue to be one of the largest tourist attractions in the area. Not only is it a great place to visit but it is a big contributor to the area’s commerce and prosperity.”

“It is so satisfying to have Letchworth Park receive this great honor. It's nice to see others in the country recognize the beautiful and majestic images that we have known forever,” said Michael Vasile, Town of Genesee Falls Supervisor. “Having grown up in Portageville and worked at Glen Iris for many years, I always knew there was no place quite like Letchworth Park. And as an added bonus the park brings much needed revenue to our local economy.”

Voting for Letchworth State Park was easy, participants from across the country were able to vote through USA Today’s 10best.com website. The contest received statewide and even national attention even gaining celebrity support from Actor Mark Ruffalo last week.

The competition was tough and Letchworth was in a dead heat contest with a Michigan state park right up until the very end, proving that nationwide people love their state parks. Letchworth State Park was one of 20 parks selected by US travel experts and was nominated out of over 6,000 state parks nationwide. The earliest state parks in the United States date back to the mid-1800s, and today, the 50 states collectively manage well over 6,000 state park units that draw in over 700 million annual visitors.

Part of USA Travel Media Group, 10Best.com provides users with original, unbiased, and experiential travel content of top attractions, things to see and do, and restaurants for top destinations in the U.S. and around the world. No business pays to be listed. At its core is the team of local travel experts: a well-traveled and well-educated group who are not only experts in their fields - and their cities - but discriminating in their tastes. These local experts live in the city they write about, with constantly updated content. 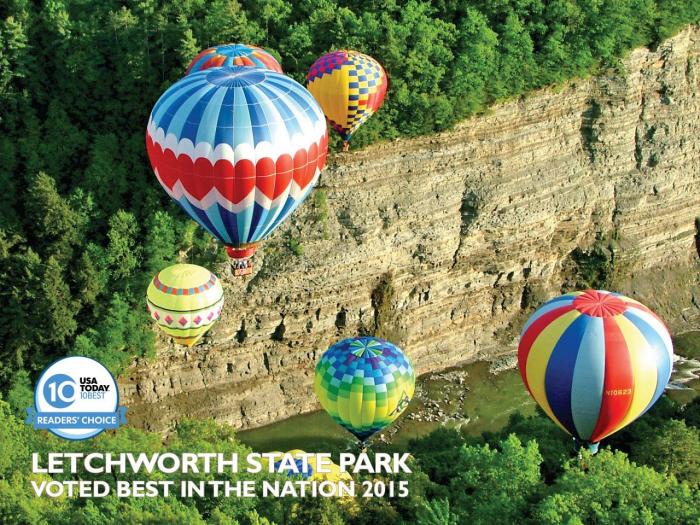