The Legend of the Silver Lake Sea Serpent

On the moonlit night of July 13, 1855, four men and two boys were fishing in a boat on Silver Lake. Their dock growing dimmer as they paddled into the darkness of the warm, breezy night.

A quiet night of fishing and enjoying the pleasant summer weather was all that any of those in the small boat were planning on for their evening’s entertainment. The soothing sound of the glistening lake water calmed the fishermen, and caused their minds to wander. After several hours of fishing, the men grew tired and began to paddle their paddle back to the dock. The hour had grown late, and the sun was long since set behind the horizon.

As they began to row the boat in, each passenger watched as a nearby floating log began to move, dipping in and out of the water. Then without notice, a horrid beast leapt from the water, showing itself in all its glory before splashing back into the murky water and disappearing. The men and boys were struck with terror, and frantically rushed back to shore to alerted the local authorities. While their story sounded impossible, they had just confronted a massive, scaly, dinosaur like creature, borne from the depths of Silver Lake.

The legend of the Silver Lake Sea Serpent was born. 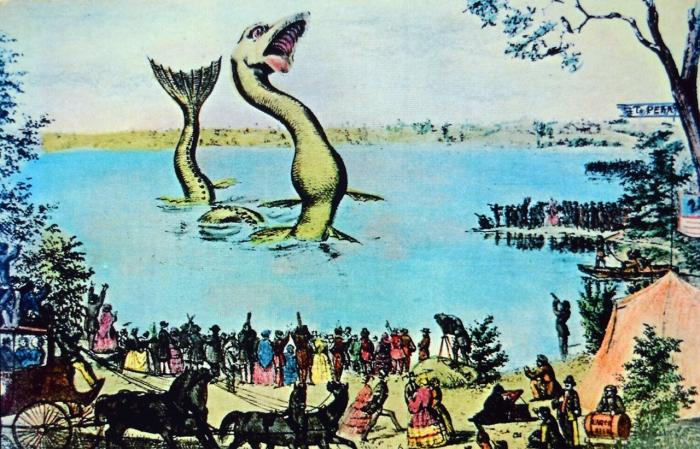 Business on Silver Lake had been painfully slow in the early summer of 1855. Mr. Walker had an idea about how to change all of that. He owned the Walker Hotel, and to run his hotel, he desperately needed customers.

Night after night in an old tannery along the Silver Lake Outlet, Walker and a few friends met and worked together to make A.B.’s deviously creative idea a reality. Slowly, foot by foot, a sea serpent grew out of a coiled wire, waterproof canvas, paint and the excited energy of a few men with an idea.

Weeks later, on July 13th, Walker and friends saw a boatload of fishermen rowing out into the moonlit night. They decided it was the time to reveal their new creation. From a shanty on the west shore, the conspirators operated the bellows which filled their sunken monster with air (which came through a hose that ran through a gas pipe sunk in the lake). As the head rose gracefully to a height of about eight feet and various other parts rose out of the water to equal heights, the fishermen received the fright of their lives, while Walker and his friends’ received results far beyond their wildest dreams!

It didn’t take long for word to spread about this hideous serpent. The hotels in Silver Lake and Perry were filled to capacity as people poured into the area from across the country to see the Silver Lake Serpent! They came by train, stage, buggy and horseback. Several expeditions were launched, including a whale-man with a harpoon, a crazed society of men armed with guns, and even companies who spent thousands on employees bent on capturing the creature.

Sadly, nothing was ever found until… 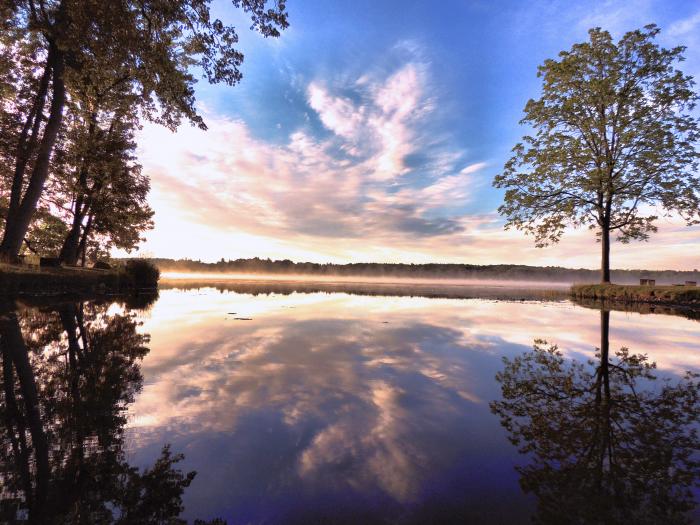 The mysterious waters of Silver Lake - photo by Breeze Photography

In 1857, a fire broke out at the Walker Hotel. Fireman rushed to the scene to put out the blaze. When they worked their way into the attic, they came upon a strange sight. Within the burned wreckage of the hotel, there sat the great sea serpent wire frame and remnants of its scaly green mesh. After the fire, Mr. Walker confessed he had created the monster to attract visitors to town, and fill up his hotel.

It’s said that Mr. Walker was inspired to build his sea serpent hoax, based on a Seneca Nation story about a monster that once inhabited the waters of Silver Lake. The Seneca’s believed that any unnecessary or unnatural noise over the water could cause a slug like creature to rise up and pull anyone to their doom. As such, great care was taken to maintain silence over and near the water. One day however, a severe lightning storm came and a bolt of lightning struck the lake casting the terrible monster upon the shore, where some of the brave warriors succeeded in killing it with bows and arrows. From that time on, anyone could talk, yell or make any noise they care to, either on the shore or on the lake.

To this day, the locals of Silver Lake and Perry celebrate the story with boat parades and festivals. 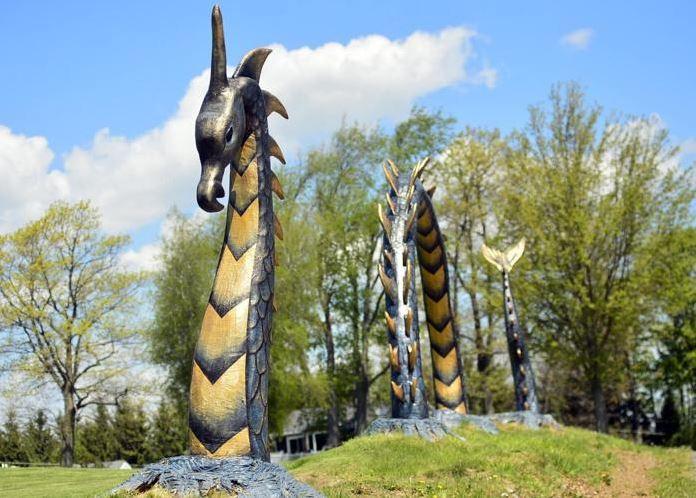 The Legend of the Silver Lake Sea Serpent Lives On!

While A.B. Walker's creation no longer exists, there's many ways you can have your very own close encounter with the Silver Lake Sea Serpent - here are a few great ideas:

The Club at Silver Lake

Set alongside the banks of Silver Lake, The Club at Silver Lake boasts an exceptional 18-hole public golf as well as a beautiful waterfront dining experience for visitors and guests. In front of the restaurant along the 18-hole, there stands a life-sized version of the sea serpent. This is a must visit selfie-spot!

Art in the Village of Perry

The sea serpent can be found everywhere in the Village of Perry, NY. From statues and public art, to the splash pad in the Village Park, we encourage you to explore the beautiful downtown boutique shops and activities. You'll soon notice sea serpents everywhere. Visit real "dinosaurs" at Prehistoric World Zoo, filled with reptiles, amphibians & more. Tag Wyoming County Tourism as you adventure the land of the sea serpent! 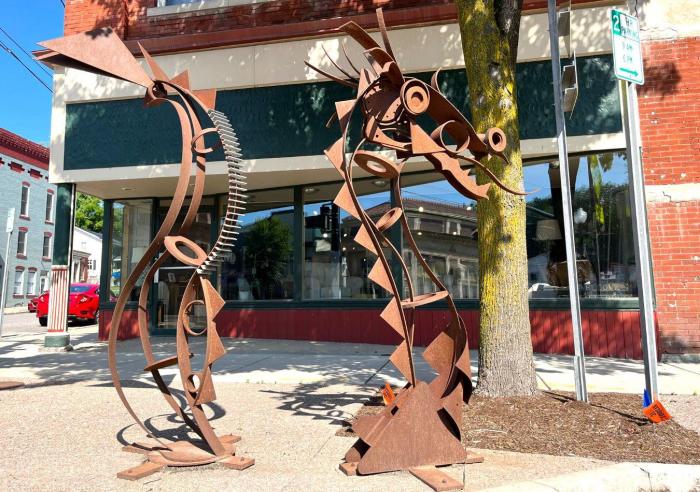 Street Art in the Village of Perry, NY

Silver Lake Brewing Project is a craft brewery specializing in Belgian and American style beers. Visit their taproom for a pint, or fill a growler or crowler to go. Pay special attention to their logo, as they take plenty of inspiration from the Silver Lake Sea Serpent. Raise a glass, and cheers our favorite legendary lake beastie! 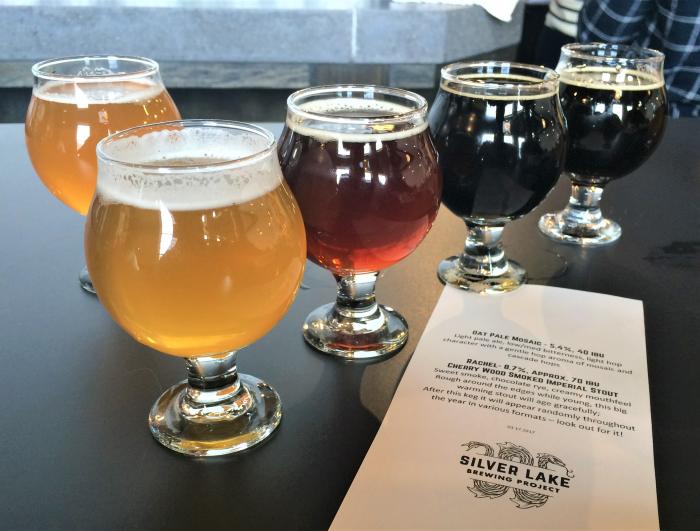 A special thank you to Bob Murphy, Sea Serpent Comics and Mike Bellamy, Silverlaken for being invaluable resources regarding this information.