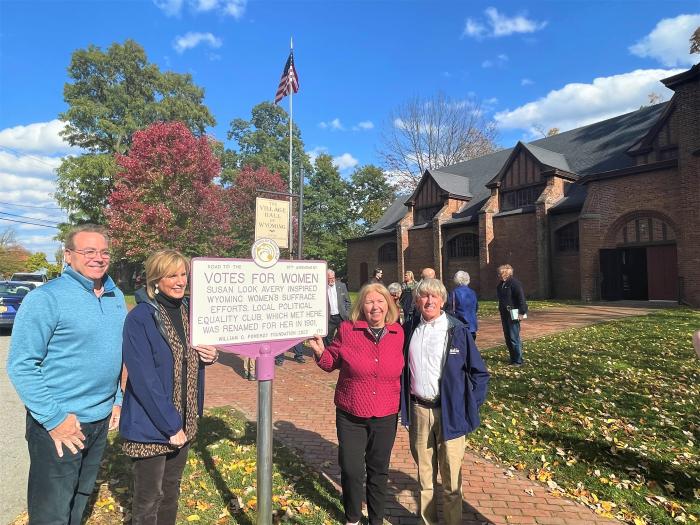 About the National Women's History Sites

The National Collaborative for Women’s History Sites, in partnership with the William G. Pomeroy Foundation, began a series of roadside markers across the United States to share the little-known stories of the fight for the vote and the struggle for the passage of the 19th Amendment in 1920.

According to the NCWHS website, for the last 20 years their organization “has supported and promoted the preservation and interpretation of sites and locales that bear witness to women’s participation in American life. The NCWHS has built the National Votes for Women Trail, a massive project to document the suffrage campaign in every part of the United States in an online database.” The historic marker portion of their efforts began in 2020 when the Pomeroy Foundation added the 100th year commemoration to its historic marker program.

After a yearlong process beginning in 2020 involving accurate documentation using primary records, the nominations were accepted. These historic markers, which are funded by the Pomeroy Foundation, were hand cast by Sewah Studios of Ohio who have been handcrafting signs for over 90 years.

Each sign is purple and white, two colors of the suffrage movement. Purple stood for loyalty and dignity, while white stood for purity.

The following outlines the three signs that now stand in Wyoming County, highlighting the important role our community played in the Women's Suffrage movement. Each of these locations is publicly accessible, and awaiting exploration!

The Susan Look Avery marker, located in front of the historic Wyoming Village Hall (17 S. Academy Street, Wyoming NY), was the first marker to be dedicated in Wyoming County.

Susan was born in Massachusetts in 1817, and was a woman ahead of her time. Living until she was 97, she spoke, wrote, and advocated for a variety of unpopular causes, including abolition, woman suffrage, free silver, and racial justice. She founded several organizations that long outlived her. As her daughter Lydia wrote, celebrating her mother's willingness to go against the grain: "She had faith that in time, if not immediately, her opinions would be vindicated."

Life took her to both Louisville, Kentucky and the town of Middlebury, NY. In both states, she became active in the women’s suffrage movement in her later years. She founded the Louisville Woman’s Suffrage Association among other organizations, which was closely followed by their Woman’s Club in 1891.

A year later in 1892, she founded the local Political Equality Club of Wyoming County, NY. She was a friend and contemporary of National suffrage leaders, including Susan B. Anthony and Anna Howard Shaw.

The Village Hall of Wyoming was a gift to the village by her daughter, Lydia Avery Coonley-Ward. The club was renamed in 1901 to the Susan Look Avery Club in her honor and meetings were held in the room directly behind the sign in the Wyoming Village Hall.

Because of her many contributions, this historic sign recognizes the work of Susan Look Avery in the Women’s suffrage movement in Wyoming County. 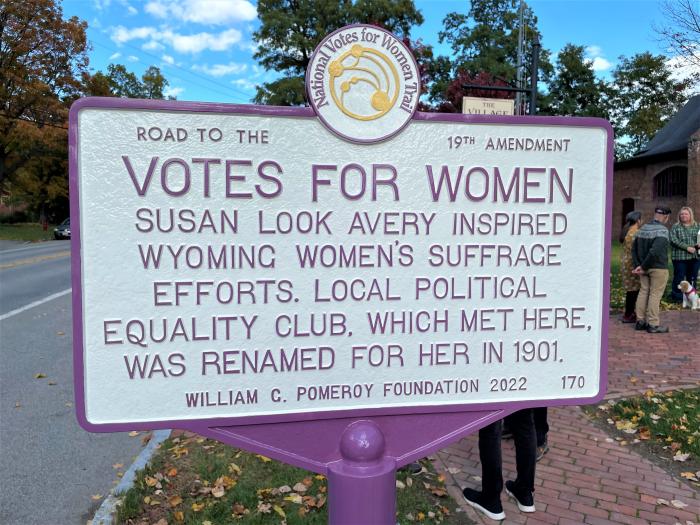 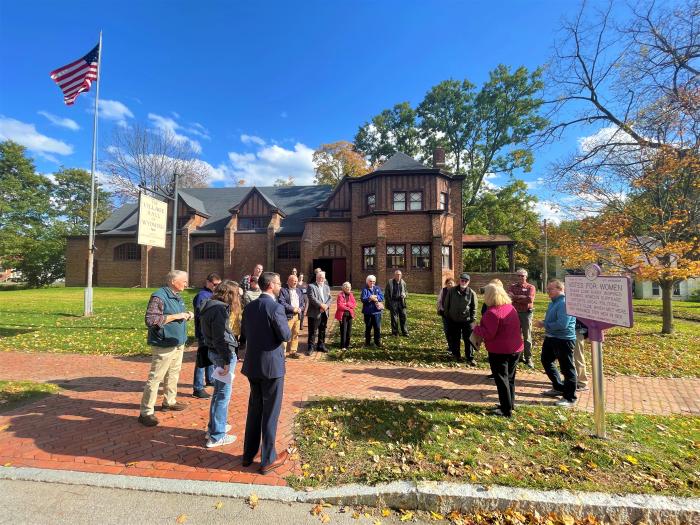 The Ella Hawley Crossett Historical Marker is located near the entrance to the Village of Warsaw Park (123 Liberty Street, Warsaw, NY).

Ella Hawley Crossett of Warsaw is a known because of her work in fighting for women's rights to vote. She also has a second NYS Marker in the Village of Warsaw, in front of the Warsaw Public Library (130 N Main St, Warsaw, NY) commemorating her as the 1890 founder of the Warsaw Political Equality Club, and the 1902 President of the New York State Sufferage Association.

Ella, along with Dr. Cordelia A. Greene and Susan Look Avery, founded the Wyoming County Political Equality Club at a convention here over two days September 17 & 18, 1891. Two other famous women addressed the two-day convention: Susan B. Anthony and Rev. Anna H. Shaw. This organization held a booth at the Wyoming County Fair every year between 1892 and 1918 when the fair was held at the Warsaw Village Park - where many women dedicated to the cause spoke at rallies. 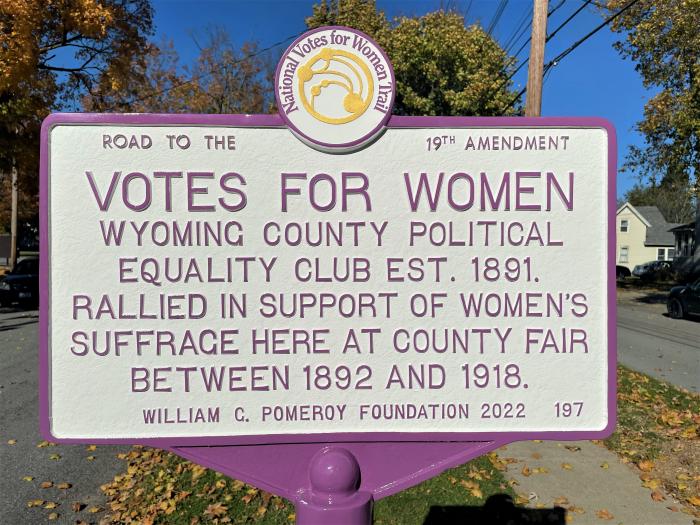 Dr. Cordelia A. Greene, followed in her father’s footsteps in her holistic approach to health. For 40 years she was the head of the Castile Sanitarium, where the first meeting was held to form the Castile Political Equality Club in 1892 - where Cordelia was elected president. She donated funds to several causes she believed in, including women’s rights.

She was a member of the American Medical Association, the Woman’s Medical League of Western New York, and State Board of Charities among others. She was actively involved in education and donated the land for this library in 1902.

The Cordelia A. Greene Library Building Association was founded in 1896, and the library itself was formally opened on March 9, 1897 where it was housed temporarily in one half of the first floor of the town hall. On August 11, 1902, the cornerstone of the now standing Cordelia A. Greene Library was laid. A sealed copper box, containing a history of the library association, as well as valuable papers and records, were placed in the stone by Greene. The one-story building was constructed of red brick, and laid in colored mortar, with blue stone trimmings. The new building was formally dedicated on December 24, 1902. With construction completed, a transfer of the books was made. Greene spent hundreds of dollars beautifying the grounds with lawns, ponds, and a fountain, and provided a boat for children. The adjacent grove extending into a park was given to the children for a playground. It was Greene's endowment of US$15,000 which paid the running expenses and bought new books. 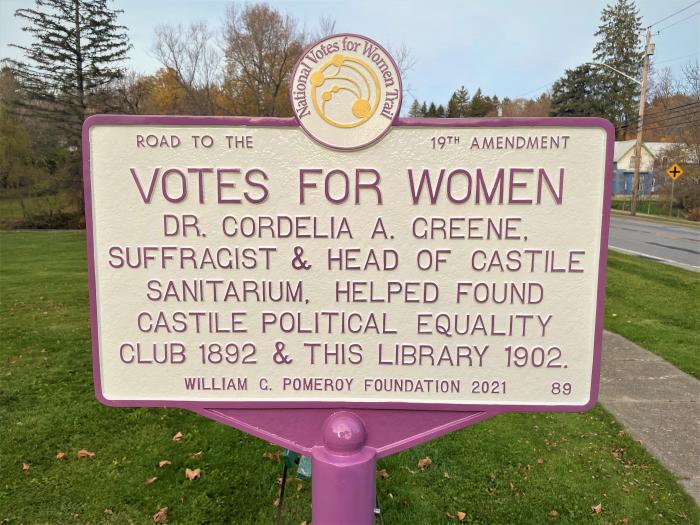 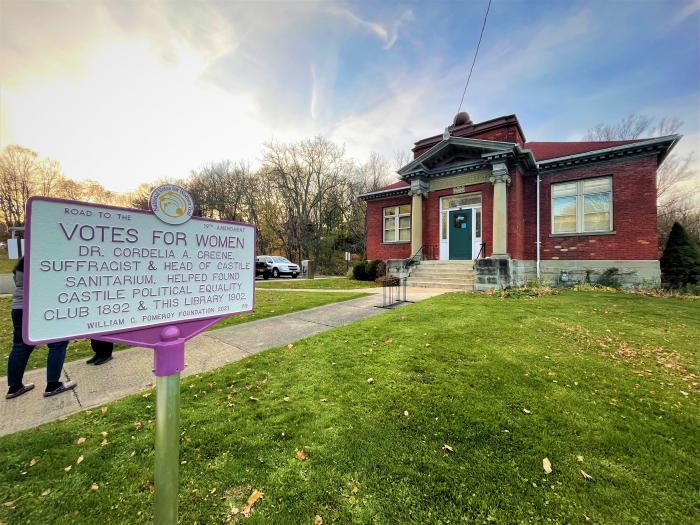 There are many more historical experiences, attractions, museums and more in Wyoming County - come here and explore!